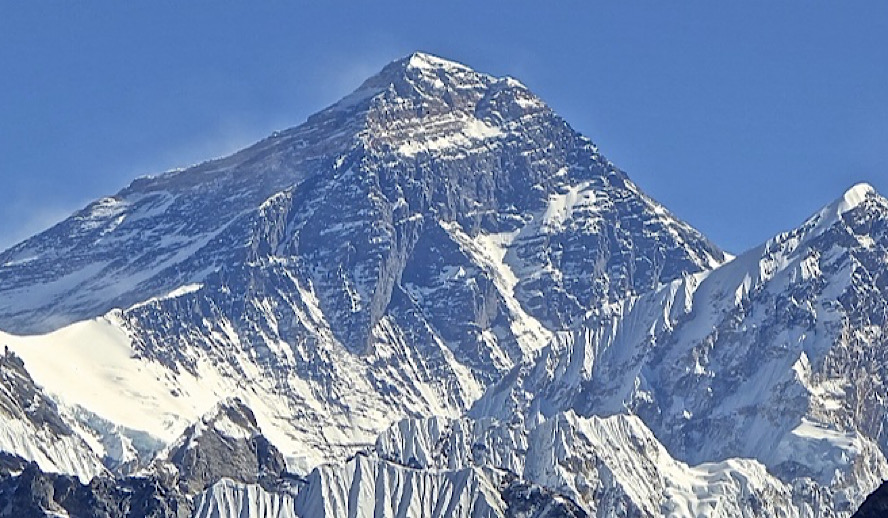 Mt. Everest and its peak are located in Nepal. It is one of the most famous natural wonders on earth, so how has Apple Maps and Google Maps failed to identify its correct geographical location as Nepal? This mistake is more significant than a simple technological error – it has stripped the country of Nepal of its natural wonder, its national landmark, and a significant recognition point for their homeland.

Please click here to sign this petition – We request Google and Apple to fix their maps and label Mount Everest and its peak’s location correctly inside Nepal.

On Top of the World

Bordering Nepal and Tibet Autonomous region of Asia sits a breathtaking mountain on the crest of the Great Himalayas. As the tallest mountain in the world, the peak of this beautiful mountain reaches an elevation of 29,035 feet. The Nepali name for this holy mountain is Sagarmatha, translating to “Peak of Heaven.” Sagarmatha is also known as Mount Everest and is revered by the Nepali people as a symbol of their identity, strength and pride. Nepal may be small in terms of size, but the Nepali people have a powerful voice.  Regardless of the large size of the two countries bordering it, Nepal deserves the ability to celebrate its most recognizable asset. While this would seem obvious, the dignity of the country has been thwarted by Apple Maps and Google Maps.

The technological giants have stripped the country of their national treasure by identifying Mt. Everest as solely in China – the label MT. EVEREST appears in China – and that is factually wrong. Anyone with an inkling of general knowledge will let you know that Mount Everest is in Nepal. For many, Nepal and Mount Everest are synonymous with each other. So how did this mistake happen and when will it be rectified – this is an urgent question for Apple and Google? Click here to sign the petition

The editorial team at Hollywood Insider had been working on a film project involving the seven natural wonders of the world. As they began researching each wonder and their locations, they noticed a significant error on iPhone maps and that error was Mount Everest being marked inside Tibet/China. To their shock, both Google maps and iPhone maps showed the same incorrect labeling.

Hollywood Insider’s CEO Pritan Ambroase remarks, “I was in the middle of breakfast and working from home on this project. I got quite the shocker. I made a few calls and the confusion continued. When my entire team confirmed that all of their devices showed the same error – it became important to help in rectifying it. Nepal and Mount Everest are synonymous with each other. Mount Everest and its peak is in Nepal and thus must be correctly labeled as such. Rather than being a political issue, this is a moral one. Mount Everest and its location being in Nepal is beyond debate or ever-changing political ambitions. Nepal is a very small country in size but not in terms of influence and contribution on a global scale. Nepal may be small – but it has its very own distinct and strong identity. It is neither like India nor like China – their two large and ambitious expansionist neighbors. Nepal is simply its very own nation with a significant contribution to the world despite its small size. The Nepali are among the kindest and most compassionate. Never will you meet a person who has been to Nepal and does not talk about the extraordinary compassion and kindness of its people. A country that has never been conquered and has retained its sovereignty. A country that is home to a multitude of races, languages and cultures – yet live harmoniously amongst each other. The country that is the home to Gurkha soldiers that served in both the World Wars. Mount Everest is a significant part of Nepal’s identity. It is our duty to protect the history of our world, and Mount Everest is a major part of it.”

Limited Time Offer – FREE Subscription to Hollywood Insider, for substance and meaningful entertainment that is free of gossip and scandal, click here

This fact that Apple Maps and Google Maps have gotten the placement wrong has been confirmed by Buddhi Narayan Shrestha, an internationally recognized and award-winning expert surveyor/maps researcher and also the Managing Director of a mapping company. He also noted the technical fact that the highest peak of the mountain with the sloping terraced portion definitely being within Nepal’s borders. 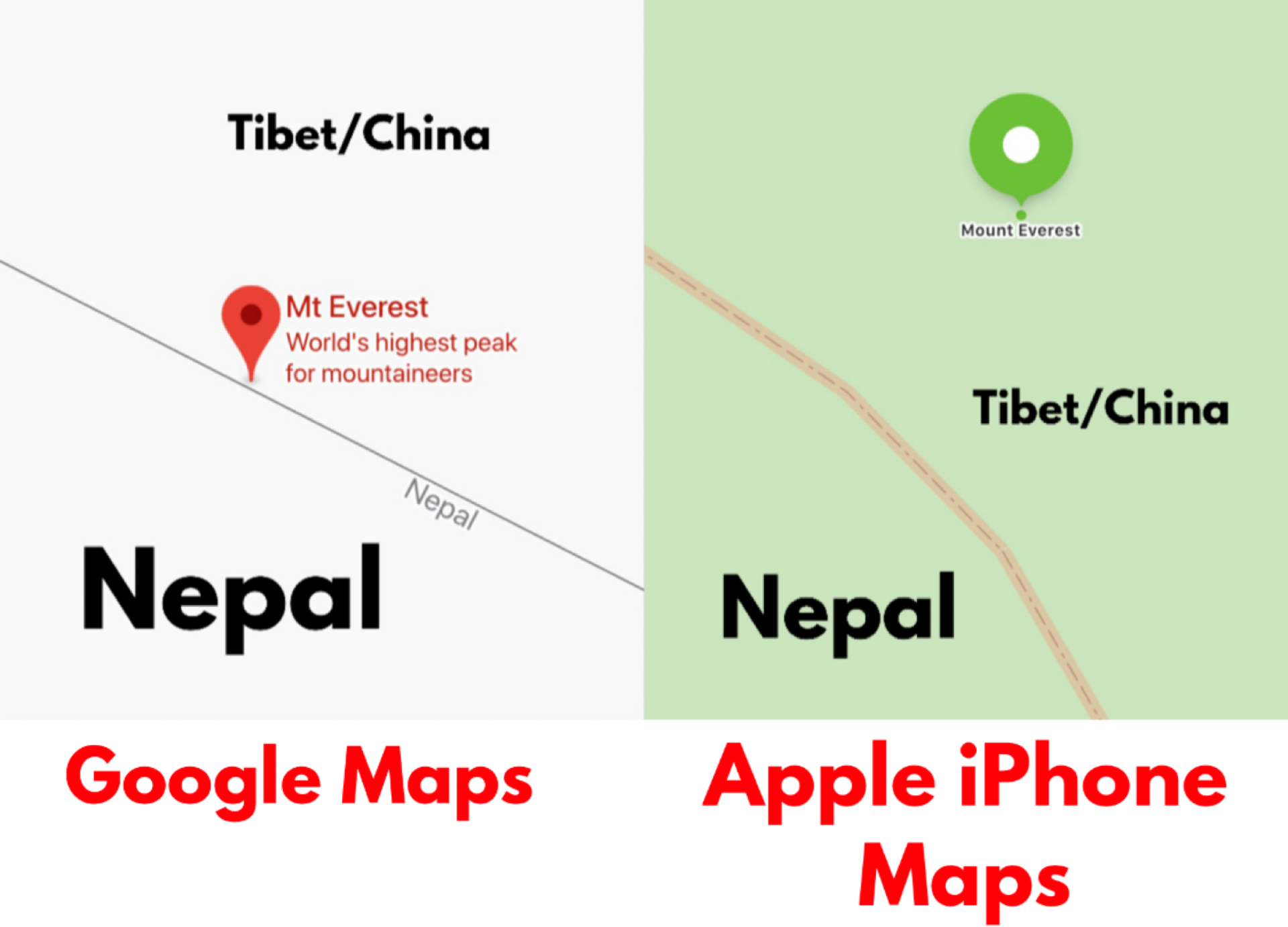 Below image: Wikipedia shows the CORRECT location of Mount Everest and peak inside Nepal 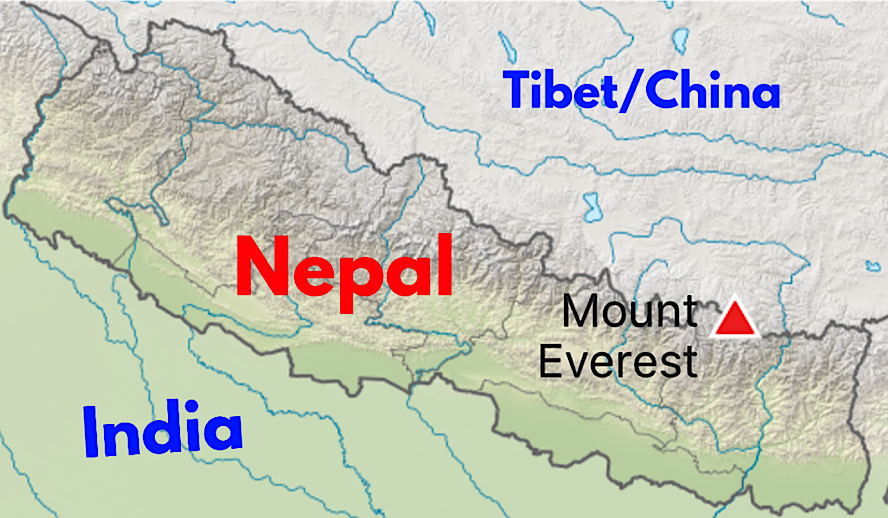 Buddhi Narayan Shrestha spoke extensively with Hollywood Insider on this issue and he confirms, “The location of Mount Everest being labelled in China, is completely wrong, whether it was done intentionally or by mistake. The highest part of Mount Everest, hundred percent of the peak, is in Nepal. I say this with absolute certainty and decades of expertise on this matter.”

Mount Everest is a significant part of Nepal’s identity with deep cultural and emotional resonance among its people. How would other countries feel if their national landmarks, be it natural or man-made was suddenly labeled as being in a foreign country by Apple or Google? We have this petition for all to sign, click here.

Apple and Google must label Mount Everest inside Nepal

To understand the impact of this falsified information – one must take a look at the number of people that use Apple and Google. More than a billion people use Apple iPhones and billions of people use Google Maps monthly – the damage is extensive and this is simply unacceptable and cannot continue on.  Since the ownership of Mt. Everest had been established and confirmed as being located in Nepal as of 1960s by both the Chinese and Nepali government, why is it still represented by Apple and Google as being located in Tibet/China?

Grand Canyon for the Americans, the Eiffel Tower for the French, Great Barrier Reef for the Australians, Mount Fuji for the Japanese, Buckingham Palace for the British, Taj Mahal for the Indians, Machu Picchu for the Peruvians,  the Great Pyramids of Giza for the Egyptians, the Great Wall for the Chinese, Calafate for the Argentinians, Colosseum for the Italians, etc. The list goes on and on.

To support the absolute fact that Mt Everest and its peak belong to Nepal and inside Nepal, Shrestha shared compelling technical and factual information:“There is a memorandum of understanding that indicates the top of Everest falls definitely inside Nepali territory. During the boundary delineation between Nepal and China in 1961-62, it was agreed that the northern half of Everest belongs to China and the southern half of Everest belongs to Nepal, as the watershed separates the northern and southern half. It is a natural fact that the highest part, that is located close to the watershed, falls in Nepal. There is about 7 x 8 ft. sloping terrace that falls in Nepal. If someone conquers the summit from the China side, he has to step on the Nepali sloping terrace to plant the flag and to put his bags down and to take photographs. It has been proven that Everest (Sagarmatha) belongs to Nepal. There was a dispute on the ownership of the top of Sagarmatha/Chomolungma between Nepal and China. Both the sides had exchanged maps and documents claiming the top [peaked on their] own side. But it was settled during the visit of Chinese Prime Minister Zhou Enlai to Nepal. A press conference was organized on 28 April 1960 in Nepal. In the press meet, Zhou Enlai expressed the acceptance of the delineation on Nepalese maps and documents. China left the claim amicably and Nepal had full ownership on the top of Mount Everest/Sagarmatha.”

Related article: Will the Diversity in Victory of Last Year’s Oscars 2019 – 91st Academy Award Winners Ever Be Repeated?

With the compelling evidence presented by Nepal, China recognized Nepal’s claim to ownership and the demarcation of territory was accepted. If this line of demarcation and country lines have been established, it is morally and ethically right to recognize such for the country of Nepal, especially on devices/maps as widely used as Apple iPhone Maps and Google Maps. It is unfortunate that a platform with such a wide reach has failed to give Nepal the right to its national landmark and iconic symbol.

Nirmal Purja MBE, an ex-Royal Marine, has reached the peaked of Mount Everest four times, and he remarks, “This has never been an issue until now. Before updating platforms like Apple and Google, people need to research and be accountable for such information. Mt. Everest is a significant part of Nepal, the country’s identity and history – it was first summited from the Nepal side and every year more victorious people stand on the summit of Everest from Nepal side.” Purja was born in Nepal and joined the British Army in 2003. Nepali soldiers, also known as ‘The Gurkhas’, have served in the British Army for more than 200 years. He was awarded an MBE (Member of the Most Excellent Order of the British Empire) by Her Majesty Queen Elizabeth II in 2018. He now works as an Extreme High Altitude Mountaineer and is a multiple world record holder in mountaineering.

At Hollywood Insider, we believe in providing a platform for support and advocacy for noble causes. It is for this reason that we have initiated a petition calling for Apple Maps and Google Maps to properly update their topographical interface to identify Mt. Everest and its peak within Nepal’s border. The benefits to this petition are boundless.

Please sign this petition and add your name to this respectable call to action – support the demand for justice for the people of Nepal.

From a cultural perspective, the Nepali community is widely known for their keen respect for others while always displaying a hospitable nature. It is this demonstration of respect that Nepal and its tranquil community deserve in return. The case for Nepal is clear and their sovereignty must be respected. Nepal is home to people of many races/ethnicities, languages and religions, thus making it a melting pot of diversity. This fact speaks to the nature of the Nepali people; kindness, peace, and respect reside at the core of their being.

Sundar Pichai and Tim Cook, I am sure both of you will agree with us on this.

We sincerely hope that Apple and Google will rectify their error and label Mount Everest and its peak as being inside Nepal.