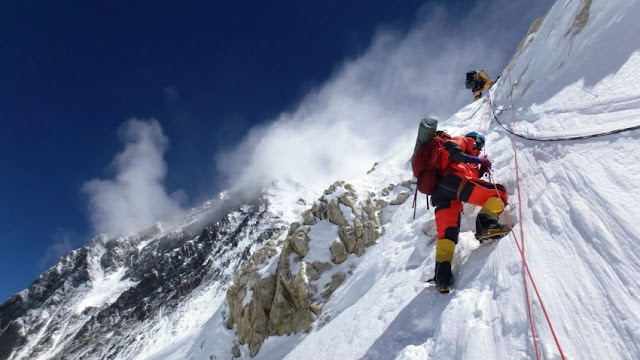 It has been a long and challenging spring on the world’s highest peak. In addition to seeing the mountain all-but completely shut down due to the coronavirus, the past few weeks have seen two summit pushes turned back due to bad weather. But now, as the seasonal monsoon looms on the horizon and time is starting to run out, a team of rope-fixing Sherpas has reached the top of the mountain at long last, with two more teams expected to follow over the next day or two.

Today, at approximately 2:25 PM local time in Tibet, a group of six Tibetan climbers reached the top of Mount Everest 8848M installing fixed ropes along the way. That group included. According to The Himalayan Times the group included: “Dorjee Tsering, Tenzing Norbu, Dunpa, Tashi Gombu, Tsering Norbu and Dorjee.” Upon reaching the top, the group used the new 5G cellular service that was installed o the mountain a few weeks back to broadcast live from the summit.

Their successful completion of installing the fixed lines resulted in the first summits of the season, but others may soon follow. A team of surveyors that have been sent to Everest to remeasure the height of the mountain has reportedly reached Camp 1 after leaving Advanced Base Camp this morning. According to ExWeb, their goal is to depart from C1 directly for the summit tomorrow, although that seems like a rather ambitious goal all things considered. C1 is located at 7000 meters (22.965 ft), leaving more than 1800 meters (5905 ft) of vertical climbing to go. That seems highly unlikely to happen in a single day.

Queuing up behind the survey team, the lone commercial squad on Everest this year is waiting in the wings. This team, which has roughly 26 members, is led by an operator called Yarla Shampo. They’ll look to summit sometime in the next few days as well, provided the weather continues to cooperate.

Traditionally speaking, most of the summits on Everest have come somewhere around May 15 in recent years. Bad weather has delayed any real attempts on the summit this season however, which is why it is now May 26 and we’re just now seeing any success this spring. Usually, the monsoon arrives in early June, which will of course close things down once again. In other words, this is likely to be the final summit push of the spring—and possibly the year—on the mountain.

Stay tuned. We’ll bring further updates as we get them.