The American man who became a porter on Everest

The American man who became a porter on Everest 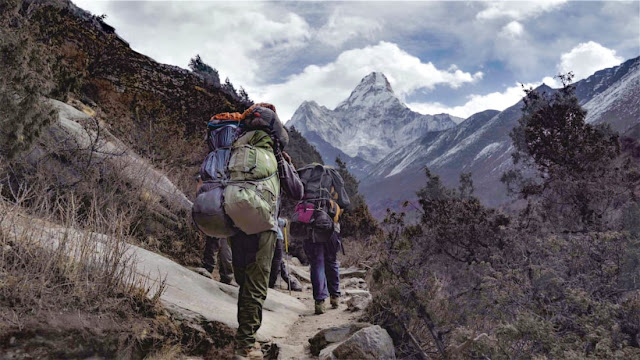 (CNN) — It might not seem that way when you read harrowing accounts of climbers perishing on its treacherous slopes, but there’s an easy way to climb Everest, and there’s a hard way.

Rather than the hike up the world’s tallest peak, like most trekkers, with the support of an organized climbing outfit, the 26-year-old decided to take a job as one of the first-ever non-native Everest porters.

That meant being paid $15 a day for hauling gigantic packs weighing up to 220 pounds (100 kilograms) along rugged, high altitude trails, huddling with fellow porters in freezing huts at night for rest, and sharing their basic rations.

Along the way, he made a film about his experiences, which he hopes will shine a light on the largely unsung work of Everest porters and the precarious way they eke out a living in one of the planet’s toughest environments. 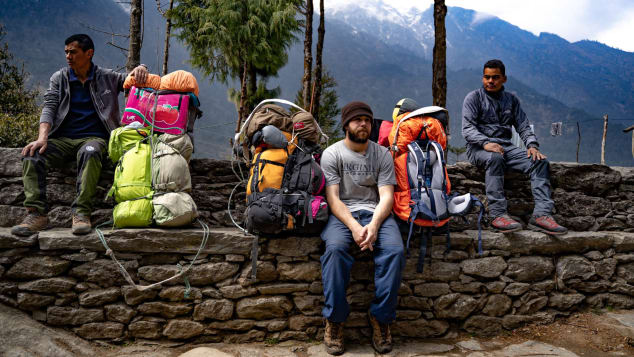 In 2019, Nate Menninger became one of the first foreign-born porters on Mount Everest.

Menninger came up with his idea to become a porter after spending a season working as a guide in Nepal, teaching himself Nepalese and becoming fascinated with the work and lives of these human hauliers.

Equally fascinated by Everest, but unable to afford the tens of thousands of dollars needed to cover the cost of the permit and support needed to reach the summit, he hit upon an idea to climb it for free.

“When I was guiding that summer, I saw how porters lived for the first time,” he tells CNN Travel. “I saw them sleeping on the floor. I saw how they ate, and how strong they were.

“That was the only feasible way I could attempt the mountain at the age I was.”

Menninger eventually scaled back his original plan to reach the top of Everest, settling for making a film about his time among the porters on the still arduous 11-day hike from the town of Lukla, at 9,400 feet above sea level, to Everest Base Camp.

“My goal was to have the exact same experience as the porters no matter what,” he explains. “I wanted to see if I could handle what it’s like to have this job and if I could be as strong as a porter has to be.”

His grueling experience is chronicled in the hour-long documentary “The Porter.” 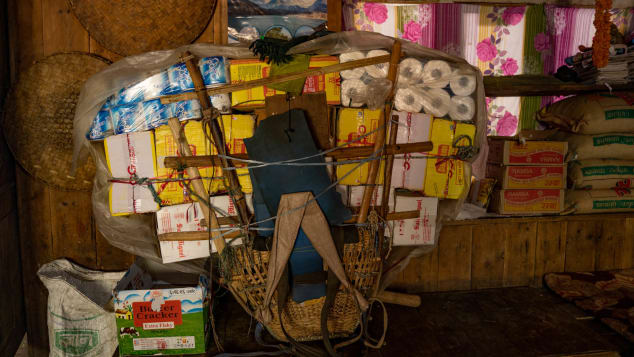 Porters are required to carry packs, known as badis, to supply the region with necessities.

The physical and emotional toll of the job is laid bare as Menninger is captured struggling with the weight of a pack that consisted of multiple bags lashed together, then trying to sleep at night in crowded porterhouses.

Subsisting mainly on a diet of rice with lentils, he lost over 20 pounds over the course of the expedition and didn’t shower for more than three weeks.

Menninger says he tried to fully embed himself into the lives of the porters, but accepts his experiences only scratched the surface.

“It’s not a sight you see a lot over there,” he explains. “I tried to take the worst scenario possible every time. If the other porters were sleeping on the floor, I wanted to sleep on the floor.

“I just wanted to be another guy in the room while people were doing their thing.”

It wasn’t just his appearance — a muscular six-foot-plus that towered over his Nepalese colleagues — that set him apart. It was also the temporary nature of his new job.

“I had a very different experience than a normal porter would because I was just coming in for one trip,” he says. “It was just a snapshot. I wasn’t really relying on the money.

“And in terms of everything that they go through, I’m just experiencing a fraction of the emotion and the physical output.”

A typical day would involve waking up at around 7:30 a.m. and going to the client’s hotel to collect their bags, before tying the bags together and beginning to trek.

“One porter carries two clients’ bags, that’s how it works,” he says. “You move very quickly. Most of the day, you’re looking down.” 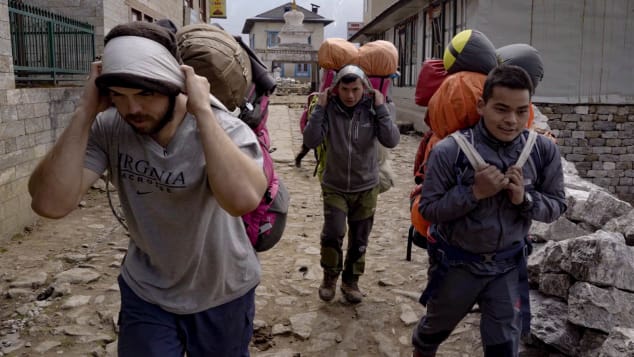 Porters have to pay for their own food and accommodation during expeditions, and Menninger says some regularly forgo meals in order to keep costs down.

“If you want to survive, you have to try to save the money you spend on food,” he says. “One porter would cut his rations in half. He would eat half meals to save money.”

While working an expedition, porters will spend around $7 a day on food and housing, and the charges rise the further up the mountain they go.

“By the end your costs are over $20, so you’re actually losing money while you’re working,” he says. “So you really rely on tips.”

As porters aren’t tipped until day 11, they essentially have no idea whether the expedition has been financially worthwhile until they’ve more or less completed it.

Menninger made $15 a day during his 11-day expedition and he and his fellow porters, who mostly hail from villages near Base Camp, received a $100 tip each. 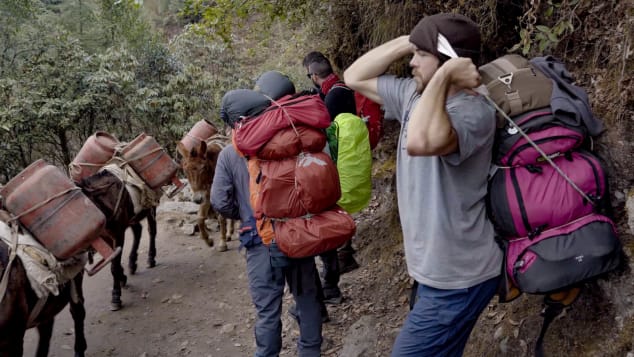 Menninger visibly struggled with his load during the filming.

“Some people tip well, some don’t,” he says. “At that point, it’s just the luck of the draw, whether you make $500 dollars or $50. It just depends on your expedition.”

They receive their tip on the final evening of the expedition but work a 12th-day “pro bono” to escort the climbers to the airport.

“Then the next day, or maybe a few days later you’ll go on another expedition,” he adds. “And you could do that five or six times in a season back to back.”

Since returning to the United States last year, Menninger has remained in contact with the porters he worked with during his time at Everest.

He admits to being apprehensive about showing his former colleagues the completed film.

“It was very nerve-wracking,” he says. “I was very, very worried about what they’d say, because it was [showing] their job on an international scale. But they said it wasn’t tough enough.” 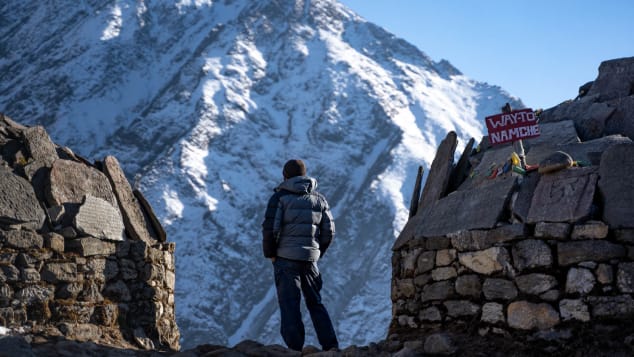 Menninger’s experiences on Everest are documented in the film “The Porter.”

Back on Everest, life isn’t getting any easier for the porters. The Covid-19 pandemic has impacted the region’s mountaineering industry, which generates around $300 million for Nepal every year.

The mountaineering industry that surrounds Everest has been under added scrutiny after 2019 was plagued by overcrowding, with climbers becoming stuck in a queue to the summit, above the peak’s highest camp at 26,247 feet.

There were at least 11 deaths, making it one of Everest’s deadliest climbing seasons, a high death toll largely attributed to difficult weather conditions, lack of experience, and the growing commercialization of expeditions.

Adding to the problems, says Menninger, is a lack of communication between the porters and their mostly wealthy clients.

“So there’s no cultural exchange. Usually, with traveling, you go somewhere to learn more. To meet other people and exchange ideas.”

He’s seen the divide between locals and tourists first hand and believes the lack of communication has created many issues.

“There’s this separation between our mountain and their mountain,” he continues.

“Their trash and our trash. It’s a terrible way to treat the situation.”

While he’s loath to tell potential climbers what a good or a bad tip is, Menninger wishes more were aware of how much porters rely on the money due to their low salaries, as well as how much workers contribute to the overall Everest experience.

“The people that live there make everything possible,” he says. “Even if you go and don’t have a porter and just carry your own bags.

“Everything you enjoy, the hotel, the restaurant. Everything has pretty much been carried by a porter at some point.

“So whether you are using a porter or not, you’re benefiting from their work. So make sure you talk to your porter. Find out how much they’re making. Ask and be curious.”

The Porter: The Untold Story at Everest from Nate Menninger on Vimeo.

Menninger says he was “very humbled” by his experiences with the porters, particularly as someone from a relatively wealthy background, and hopes his film will elevate the porters of Everest by demonstrating what they’re able to endure and how hard they work.

“Even if you go to Everest, you will not see where your porters sleep. The movie is the first time you’d see this.

“I wanted to show that these people were strong, proud, and powerful and that anyone can have pride in any job in the world,” he adds.

Menninger’s documentary “The Porter: The Untold Story at Everest” is available to view on Vimeo.