Visas on-arrival have only been halted temporarily for citizens of five countries hit hard by Covid-19, Immigration Department clarifies

Visas on-arrival has only been halted temporarily for citizens of five countries hit hard by Covid-19, Immigration Department clarifies

Only citizens from China, Japan, South Korea, Italy, and Iran are no longer eligible for a visa-on-arrival and will need to obtain visas at the Nepali embassy or consulate before arriving in Nepal. 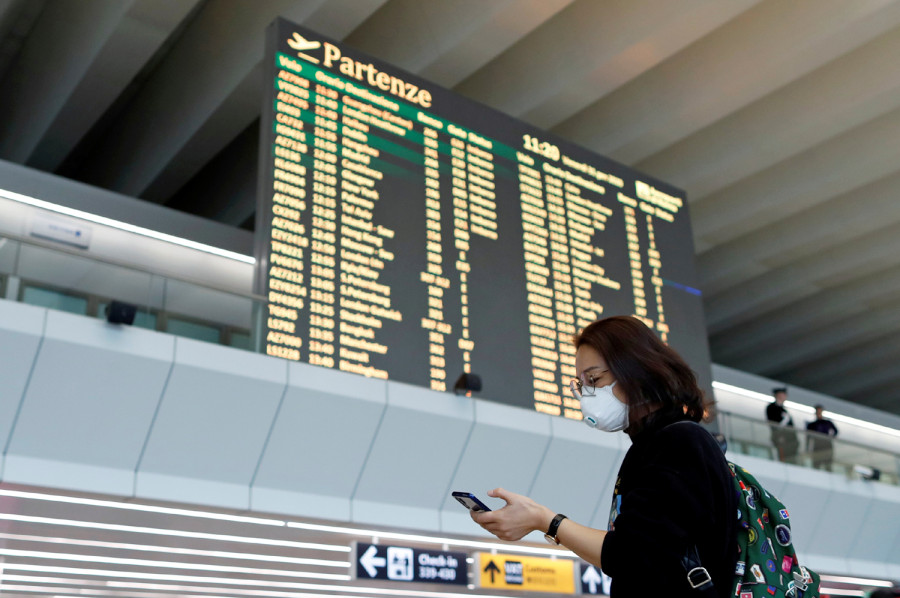 A passenger in a protective mask uses her phone at Rome’s Fiumicino airport. Reuters File Photo

The Nepal government has decided to stop issuing visas on-arrival to foreign nationals from five countries that have been hit hard by the coronavirus outbreak, according to the Department of Immigration.

A Cabinet meeting on Sunday decided that visas for citizens of China, Japan, South Korea, Italy and Iran will not be issued on arrival, effective from March 7, according to an official at the department. If citizens from these countries wish to travel to Nepal, they will need to obtain a visa at the Nepali embassy in their respective countries.

The Cabinet decision had led to confusion among potential visitors, with many unsure if they needed to get visas before arriving in Nepal. Responding to a query from the Post, an official at the Department of Immigration said that the temporary halt to the visa-on-arrival programme was only applicable to citizens of five countries; all others who were eligible for the visa-on-arrival will continue to receive them.

The new rule is applicable until March 30.

“The government will decide whether to extend the decision beyond March 30 after assessing the situation,” said the official who spoke on condition of anonymity.

According to reports, South Korea said on Monday that it had detected 476 new cases, more than double the tally reported in China over the same period.

With 4,212 confirmed infections and at least 22 deaths, South Korea has the second-largest national caseload from the outbreak, which began in China’s Hubei province late last year.

Italy now has more than 1,600 confirmed cases, while Iran is nearing 1,000, with more than 50 deaths. As many as 239 people have tested positive for Covid-19 in Japan as of March 1, according to the World Health Organization.

A total of 2,912 people have died inside China, with more than 80,000 confirmed cases of the virus. China on Monday reported 42 more deaths, all in Hubei.

Currently, only citizens from 12 countries—Nigeria, Ghana, Zimbabwe, Swaziland, Cameroon, Somalia, Liberia, Ethiopia, Iraq and Palestine—are required to acquire a visa prior to their arrival in Nepal.